If you don't receive a response to an email from Dr. Gots in 48 hours, please call the office and leave a voicemail message.

Anxiety is highly unpleasant. It causes physical discomfort—shortness of breath, muscle tightness, dizziness, queasiness—and mental anguish. In all my years of clinical practice, seeing thousands of people with anxiety, I have never encountered anyone who has not desperately wanted to get rid of it.

Earlier in my career, I was a dedicated advocate of techniques aimed to reduce, if not entirely eliminate, anxiety. I taught progressive muscle relaxation for tension- and pain-reduction, deep breathing to manage panic attacks, and thought-challenging to address catastrophic thinking. But in recent years, these approaches are no longer regular staples of my clinical repertoire.  Like many of my cognitive-behavioral colleagues, I have changed the focus of treatment from reducing anxiety to learning to accept and manage emotions, even negative ones like anxiety, while embracing uncertainty with the aim of living a richer life.

Practicing acceptance requires a major shift in attitude. For most people with anxiety, avoidance is the most common coping strategy. But avoiding anxiety-provoking situations and triggers comes with a steep cost: a flat, joyless existence.

Think about anxiety as a wave in the ocean.  If you try to outrun it, you may end up crashing into the shore with skinned knees and a mouthful of sand.  But if you dive into the middle of the wave, it will wash over you and lose its momentum as it reaches the beach.

Why is it worth it for you to dive into the wave? If you can answer this question − hint: consider what values are important to you − you will finally be able to stop avoiding discomfort and start living a more fulfilling life, anxiety and all.

If You Have OCD, Don’t Try This!

With summer travel in full swing, you may be tempted to look for “hacks” to make your packing and departure easier. Many are perfectly innocuous and even helpful. Rolling your clothes to maximize suitcase space or stuffing your shoes with your socks and underwear? Good ideas!

But if you have OCD and get stuck checking appliances, light switches, and door locks prior to leaving on a trip (or even for just the day), I would strongly advise you not to listen to the Lifehacker tip to take photos of your stove, thermostat, and appliances prior to travelling to ease your anxiety about having left something turned on.

It may be tempting to sidestep the checking process by snapping pictures to reassure yourself that you won’t have started a fire or caused a burglary.  For a short time, your anxiety may lessen. But if you have OCD, the relief you feel will undoubtedly be short-lived.

Compulsions such as checking do serve to relieve anxiety in the short run. But they tend to escalate and demand more and more time because the doubt returns. The intolerance of uncertainty is a core feature of the thinking patterns fueling compulsive checking and other OCD behaviors.

Rather than checking over and over (or taking pictures) to feel certain, you need to train your mind to accept the lingering feeling of doubt by practicing—preferably before you go away for an extended period of time—setting a limit on the number of times you allow yourself to check and leaving even if you feel the urge to go back for another once over. The key is deciding ahead of time, rather than letting anxiety guide your actions. If you typically check appliances or the door ten times, say, start by cutting back by ten percent. When that becomes easier, reduce the number of checks again, and so on, until you are down to one or two.

When leaving for vacation, you can allow yourself an extra check (but only if you decide on the number in advance). Taking a picture might seem tempting, but it won’t lessen your discomfort if you have OCD. I’ve had patients tell me they’ve tried the picture hack only to question whether they might have turned the stove back on or plugged the iron in again after taking the photo.

So come up with a plan in advance, practice over and over before your trip, and save the photos for the sights you want to capture on your travels.

One of the foundations of Cognitive Behavior Therapy is that our thoughts affect our emotions. And much of what we think, even if we strongly believe our assumptions, may not be true.

Anger is one of many emotions fueled by our thoughts about the behavior of others. The stories we create in our minds may be complete fictions, but we rarely stop to consider alternate interpretations.

If someone cuts you off in traffic, say, how do you react? I doubt the first thing that comes to mind would be: “Oh, she must rushing to the ER because the police just called to say her teenager was hit by a car while crossing the street on the way to school.” More likely, you would be thinking, “ What an inconsiderate !!@**” Neither thought is truer than the other, yet your emotional response to each would likely be completely different.

Considering a possible backstory can be a powerful way to defuse a highly charged, negative emotional reaction.

I recently had the opportunity to experience such a change in perspective when I learned some new information about my dog Roland, a three-year-old Labrador Retriever we adopted when he was just one. He had spent the first year of his life as an outside dog in rural Louisiana, so kitchen appliances, stairs, and traffic all provoked frenzied barking and mouthing, drawing blood or ripping clothing if an arm or leg was in close proximity. He also came to us with multiple medical problems and partial blindness, all of which contributed to his arousal.

Fast forward two years later, and Roland is much calmer. A model dog, almost. I no longer have bruises and scabs on my arms and legs, and most of the time, I can cook dinner without having to endure an hour of ear-splitting barking. But one behavior I have not been successful in training out of him is food thievery. Even though we try to be careful not to leave food within reach on the kitchen counter, he has managed to snag a bowlful of rising pizza dough (resulting in an expensive trip to the ER), a piece of raisin (a potential toxin to dogs) bread, and hunks of imported Parmigianino Reggiano from the fridge.

I used to get angry and—I am embarrassed to admit this because I consider myself a “positive trainer” who does not believe punishment changes the behavior of animals or people—shout at Roland. But a few weeks ago I learned something that has made it easier for me to remain calm, or at least calmer, when he misbehaves.

Through some Facebook sleuthing, I tracked down the breeder who owns his parents. She told me he was the runt of the litter. His mother rejected him, and he had to be hand-fed to get enough milk. Poor puppy! Any irritation I had felt towards him melted away, replaced by sadness and compassion.

Everyone has a backstory–maybe not as compelling as Roland’s but still deserving of consideration. So, before jumping to conclusions about a person’s character when an interaction upsets you, try stepping back and observing your reactions without judging.  Even if your anger persists, you may avert a response you will later regret.

This blog is intended solely for the purpose of entertainment and education. All remarks are meant as general information and should not be taken as personal diagnostic or therapeutic advice. If you choose to comment on a post, please do not include any information that could identify you as a patient or potential patient. Also, please refrain from making any testimonials about me or my practice, as my professional code of ethics does not permit me to publish such statements. Comments that I deem inappropriate for this forum will not be published.

If you don't receive a response to an email from Dr. Gots in 48 hours, please call the office and leave a voicemail message. 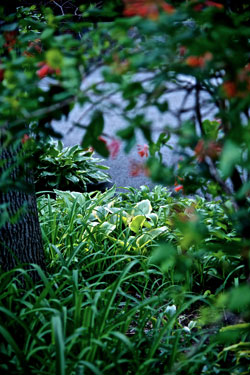